The clouds parted for the opening races Sunday at the Dodge County Fairgrounds Speedway. Five divisions took to the ½ mile dirt track on the Kim Parsons Memorial Tour. The Daizy Sweeps Grand Nationals feature saw Aaron Streblow take the early lead as Jeff Richards raced into second by lap 2. Richards started to reel in the leader as Todd Ascherien and John Stanton raced side by side for third as Stanton keeps it. The top four cars ran tight the next few laps with Streblow finding his groove on the high side as Richards kept the pressure on. Ascherien kicked it in high gear on lap six as he managed to move around both Stanton and Richards and started to gain on the leader. Unlucky lap 13 saw Ascherien’s run end as he had a tire blow, bringing out the only caution. The top two put on quite the show on the restart as they raced side by side for the lead till Richards uses the low line on lap fifteen to move out front. Richards takes the checkered followed by Streblow and Jason Dyer. Richards won his heat to complete a clean sweep.

The Vic’s Auto Body Sales & Service four cylinders took to the track next as Cody Pankow took the early lead as Chris Mass and Mitchell Fairbank followed suit. Pankow took control of the top spot as lap nine saw Fairbank pull alongside Pankow to race for position. Side by side action ensued the next few laps as Fairbank takes over second on lap eleven. Pankow takes the checkered to complete a clean sweep followed by Fairbank and Pankow.

The Twisted Iron Custom Cycle Sport Modifieds had Jeff Schmuhl grab the early lead as the field sorted out behind him. Kevin Bethke and Brandon Schmitt followed the leader as the yellow flag fell with degree in the track on lap three. Schmitt took over second on the restart and set his sights on the leader. Another caution came on lap five and when the green came out Schmitt powered the #20 front as Schmuhl tucked in behind followed by Jack Jones. Schmitt continued to lead the field with a mirror full of Schmuhl. Lap fourteen saw the final caution and tightened the field. The restart saw Schmitt take to the low side of the track as Schmuhl tried the high groove. Schmitt hung on to win as Bethke raced into third spot. Heat winner was Zach McKinnon.

The Dump Bar & Grill Street Stocks took to the track next as James Fletcher jumped out to an early lead as Russ Davison and Jesse Krahn tail the leader. By lap seven Davison was tight on the leaders bumper and the next few circuits saw him try the high and low groove as Fletcher maintained top spot. Davison continued to put pressure on the leader as Fletcher found his niche running the high groove as fans saw some great racing by the leaders. The last few laps saw Fletcher starting to pull away and take his first feature win followed by Davison and Krahn. Fletcher also won his heat race which earned him a clean sweep.

The final show of the night was the Twisted Iron Custom Cycle Modifieds. Dan Roedl grabbed the lead from the green and led start to finish as Mike Mueller and Jeremy Christians tried to chase him down. The only yellow flew on lap 17 with a spin. Roedl continued to dominate on the restart and take the checkered followed by Mueller and Nick Firari. Christians was the heat race winner.

The next race is Sunday May 1st on Triana’s Trophy Case night at the track. The first four races start at 4:00 with pit gates open at 1:00. 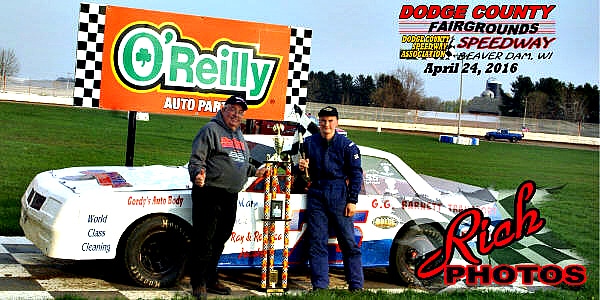 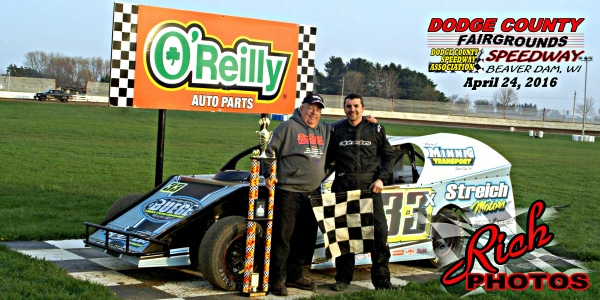 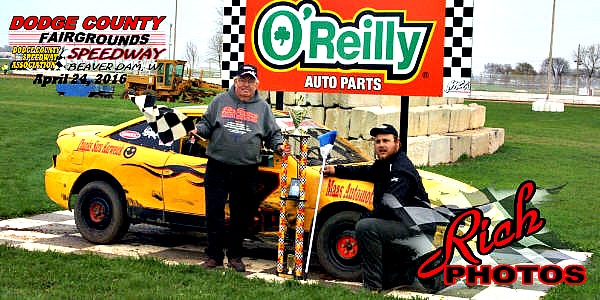 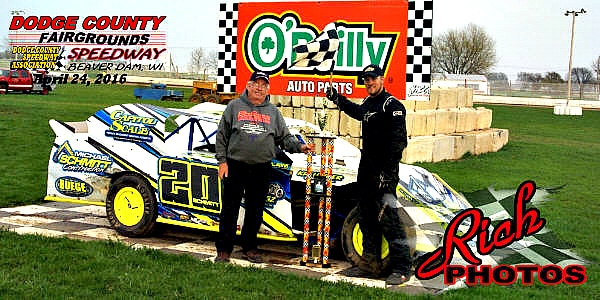