Fast and Furious Race Night at the Fairgrounds

Fast and Furious Race Night at the Fairgrounds

Four out of the five feature events came down to the last lap on Anderson Real Estate, Dennis Haldemann Memorial night at the Dodge County Fairground Speedway. The Daizy Sweeps Grand Nationals took to the track first as Todd Ascherien and Jeff Richards started the race side by side and continued that way for the first few circuits. Ascherien took to the high side of the half mile to stay in the lead as Richards followed suit. Richards repeatedly tries to duck low under the leader with some close racing between the leaders. Meanwhile Larry Richards had moved into third spot and had a front seat view of the battle taking place up front. Ascherien found his line on the high side of the track as Richards could not make the bottom work to his advantage. Ascherien took the checkered followed by Jeff & Larry . Ascherien earned a clean sweep with an earlier heat win as well as Larry Richards.

The newly named Vic’s Auto Sales & Service Furious Fours took to the track next. Jay Orr raced out front to take the early lead and never looked back. The battle for runner up spot ensued between Jess Ehlers and Chris Mass. By lap 7 Maas pulled up tight on Ehlers bumper but Ehlers found her line and stuck with it. A last lap charge by Maas proved not enough as Ehlers finished second followed by Maas. Orr pulled a clean sweep with a heat win as Cody Pankow also registered a heat win.

The Twisted Iron Custom Cycles IMCA Sport Modifieds pulled onto the track for their feature event. After a restart the #17 of Jack Jones grabbed the lead as Jeff Schmuhl and Brekken Kleinschmidt followed suit. By lap 3 Tim Sheppard pulled up to battle for third as Schmuhl was starting to chase down the leader. The first caution came on lap 5 for a spin and on the restart Jones kept the high line as Schmuhl stayed low and Sheppard powered into third spot as the top three cars ran nose to tail. Schmuhl was all over the back bumper of Jones just waiting for an opportunity to open up. Lap 15 saw the final yellow fly with degree on the track. The leaders put on quite a show on the restart as Jones & Schmuhl stayed up high, leaving the low line open as Sheppard powered out front and took over the lead as Schmuhl played follow the leader and raced into second. Sheppard was feeling the pressure the remaining laps from Schmuhl as they ran nose to tail till the white flag lap. The crowd was on their feet as Schmuhl did an outside pass on the high side to take the top spot and Sheppard gave it everything he got to fight back, but ended up losing positions. Schmuhl took the checkered followed by Kleinschmidt & Tim Thrun. Schmuhl also completed a clean sweep with a heat win as well as Shaun Johnston.

The 15 lap Dump Bar & Grill Street Stocks saw Russ Davison take the early lead followed by Jesse Krahn and Chris Prust. By lap 4 Krahn was starting to close the gap between himself and the leader as James Fletcher puts pressure on Prust. On lap 6 Krahn tucked the nose of the # 55 under Davison but Davison motored the high side and pulled away as Fletcher races into third. A few laps later Krahn repeats the move as Davison holds strong. The white flag lap proved costly for Davison as his motor let go ending his night. Krahn went on to win followed by Fletcher and Prust. Davison was the heat winner.

The last feature of the evening was as action packed as the others as Tim Robbins took off from his pole position followed by Jeremy Christians and Dan Roedl. The top 3 cars ran within a car length of each other as Robbins found his groove on the high side. Christians tan tight to Robbins bumper and on lap 10 made a move on the bottom but Robbins stayed out front. With 5 laps to go Christians has a mirror full of Roedl as he continues to try to race under Robbins for the lead. The next time around Roedl takes a peek under the #99 but the crate motor of Christians holds his line. Robbins had his car dialed in and continued to lead. On lap 18 Roedl powers around Christians out of turn 2 to take over second. As the white flag waves Roedl was coming up on the leader in turn 3, and with a last lap pass he surged around the leader to take the win followed by Robbins and Christians. Roedl also earned a clean sweep with a earlier heat win. 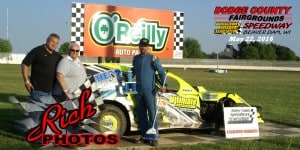 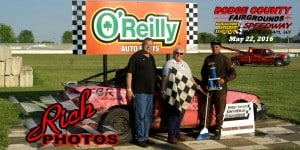 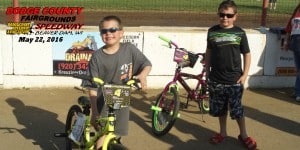 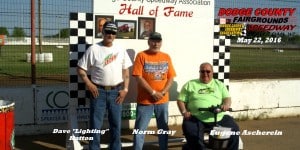 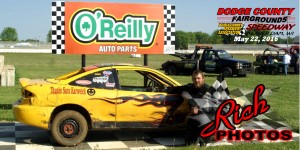 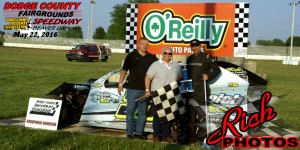 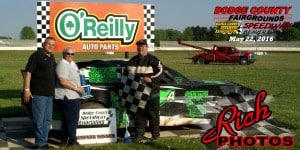 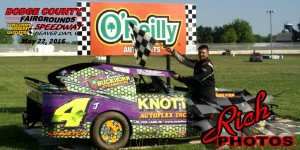 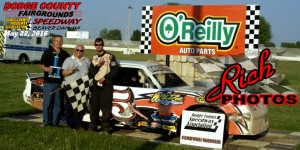 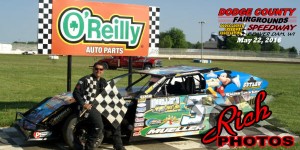