Five divisions took to the track on Triana’s Trophy night at the races on Sunday evening. The visiting Dirt Devils took to the track on their first time out here this season. Cody Pankow raced to the front by lap 1 and managed to keep the lead the entire 15 lap feature. Shaun Bangart and Chris Maas followed suit with a heated race for runner up spot. Lap 6 saw Maas try the low groove as Bangart holds his line. Maas pulled alongside Bangart on lap 10 as they raced side by side with Maas taking over 2nd spot. The caution flew on lap 11, tightening the cars back up for a 4 lap shootout. Pankow had his hands full the remaining laps as Maas continued to put pressure on the leader. White flag lap saw the top 2 cars bumper to bumper as Pankow gets the win followed by Maas & Bangart. Heat winners were Pankow & Bangart.

The Tim Paitrick Street Stock Feature had Michael held grab the early lead followed by Chad Hummelmeier, Russ Davison & Rob Maule. By lap 3 Hummelmeier uses the bottom of the track to surge into the lead. Maule took no time to learn the track as he powered his mount into 2nd spot by lap 5 and starts to reel in the leader. Hummelmeier did some hard driving keeping the front spot during 2 cautions as Maule & Davison followed. Maule saw his opportunity on lap 14 as Hummelmeier wavered coming out of turn 2, losing some ground allowing Maule to take over the lead. Hummelmeier managed to keep 2nd spot but with laps winding down Maule powered his way to his first feature win at the fairgrounds followed by Hummelmeier & Davison. Heat winners were Hummelmeier & Dan Miller.

The Daizy Sweeps Grand Nationals took to the track next with Nathan Persha taking the early lead followed by Jay Schaalma & Todd Ascherien. It was anyone’s race the first few circuits as Ascherien roared his way out front by lap 2 with John Stanton playing follow the leader. Persha held third spot as Kenny Richards started putting the pressure on him & on lap 4 dove into the bottom groove to take it. Ascherien was able to hold off Stanton and take the checkered flag followed By Kenny Richards in third. Heat wins went to Stanton & Ascherien.

United Auto Parts Sport Mods saw Jack Jones & point leader Jeff Schmuhl take the green flag out front. The caution flew on lap 2 as multiple cars tangled in turns 3 & 4.  Brekken Kleinschmidt, trailing Schmuhl by 5 points coming into the night was involved and left the track on the hook ending his night. On the restart Schmuhl, who managed to avoid the melee jumped out as Wyatt Block went around Colten Van Hierden & Keith Schmitt. Block got within striking distance on lap 4 but Schmuhl hung on to win followed by Schmitt.  Schmuhl was also crowned Track Champion as heat wins were recorded by Jones & Block.

The Performance Motorsports IMCA Modified feature saw Jay Schraufnagel lead the field as Jeremy Christians, Frank Firari & Kelly Brown were in hot pursuit. Christians powered his #99 mount out front after the first circuit as Brown followed suit the next time by being hounded by Matt Crist who took over 3rd spot. Christians started to distance himself from the pack by lap 5 as they raced for position behind him. Christians took the checkered flag as well as the Track Championship followed by Brown & Crist. Heat winners were Schraufnagel & Christians.

The final race of the season will be next Sunday, September 6th with a rain date of September 13. “Fury at the Fairgrounds” will be the only non IMCA sanctioned event of the year! Numerous lap sponsors and additional money is rolling in, with it all being given to the drivers as a THANK YOU for supporting us this season! Along with Countryside GM of Beaver Dam as trophy sponsor, we will also be having the group from the Nations of Patriots on hand with the flag on display for our national anthem. In addition, Heroes Hunt for Wounded Warriors will have a booth set up, on track Autograph session on track at intermission and free admission to Armed Forces with ID. Come celebrate the last race of the inaugural season at the Dodge County Fairgrounds Speedway Sunday Night! General admission gates open at 3:00 with racing starting at 5:00. 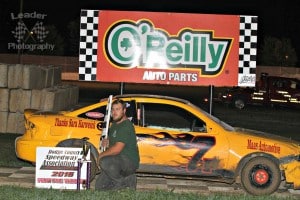 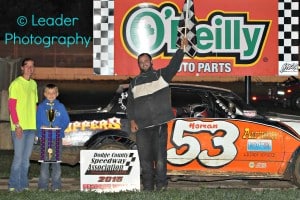 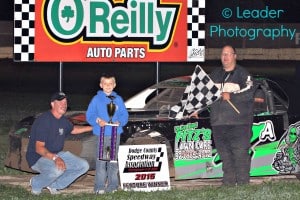 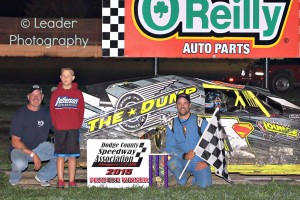