The last checkered flag fell on Sunday night at the Dodge County Fairgrounds Speedway, crowning two more track champions. The Dirt Devils made their second appearance of the year on Countryside GM night at the races. Their feature event had Chris Maas lead the entire 15 laps but not without feeling heat from Jay Orr & Tim Simon on the beginning laps. On lap 4 Simon got the edge on Orr for second spot as a 3 way battle for third ensued as Jake Balk runs away with it.. The second caution fell on lap 7, tightening the field up. On the final restart it was anyone’s race as Mass had a mirror full of Balk, Simon & Cody Pankow. The white flag flew as Balk looked low under Maas for the lead, with Maas keeping top spot. The final lap Maas had 3 cars tight on his tail and he was able to hold on for the victory followed by Balk & Simon. Heat winners were Maas & Simon.

The Daizy Sweeps Grand Nationals took to the track for their final point night. After taking 2 restarts Jeff Richards & Todd Ascherien did some hard side by side racing for the lead with Richards getting the edge. Point leader Kenny Richards powered into 2nd spot by lap 3 as Roger Lee was making his way thru the pack and broke into the top 4 pack by lap 4. Lap 7 saw the Richard brothers battling for the lead as Kenny used the low groove and raced out front overtaking Jeff and Lee moved into 3rd spot. The next time by Lee smoothly races around Jeff for 2nd as Ascherien & Jeff have their own race going for 3rd spot. After trying the high and low groove, Ascherien found his line and moves into 3rd on lap 12. Kenny Richards takes the checkered as well as the Track Championship followed by Lee & Ascherien. Heat wins went to Ascherien & John Stanton.

Tim Paitrick Transmissions Street Stocks took to the halfmile next as point leader Russ Davison powers his way out front by lap 2 followed by Tim Draheim & Dan Miller. After a caution on lap 4, Miller takes over second spot and starts moving in on Davison as Draheim feels the heat for 3rd from Phillip Wuesthoff & Alex Crasper. By lap 7 Crasper races into 3rd spot as the yellow flies again. On the restart  Davison keeps top spot as Crasper pulls alongside Miller to challenge for second. The top 3 cars stayed nose to tail as lap 10 saw Miller looking for a line around Davison. Davison held strong and went on to win not only the feature but the Track Championship followed by Miller & Crasper. Heat races went to Miller & Davison.

United Auto Parts sport modified feature had Tim Thrun take the early lead as Mike Schmul took over 2nd on lap 3 followed by Tim Sheppard. Schmul began to chase the leader the next times around and made his move on lap 7, taking top spot as Brandon & Keith Schmitt were making their way thru the field. By lap 8 Sheppard was being hounded by the Schmitt team as Brandon surged into 2nd position followed by Keith. On lap 10 Brandon took to the bottom of the track to battle for the lead as Keith used the high groove to take over 2nd and zero in on the leader. The remaining laps saw Schmitt all over the bumper of Schmuhl, using the entire track to find a lane to pass. Schmuhl hung on to a  hard raced victory as K. Schmitt settled for second followed by B. Schmitt. Heat winner was Shaun Johnston.

The Performance Motor Sports IMCA Modified feature saw Frank Firari grab the early lead with Jeremy Christians racing thru the pack and into second. On lap 4 Christians ducked under Firari and took over the lead as Jamie Schmidt held onto 3rd. Christians kept the top spot as the yellow flew a few times due to spins. Schmidt & Firari took to some side by side racing the next few circuits as Schmidt flew into 2nd on lap 10. The final caution came on lap 11 as Firari was forced to end his night early. Christians retained the top spot on the restart as Nick Firari fights for runner up spot with Schmidt , getting it on the final lap. Heat winners were Christians & Frank Firari. 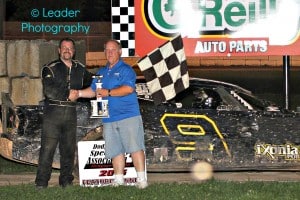 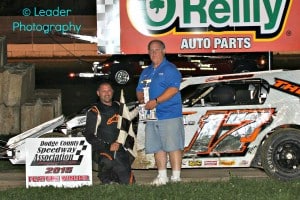 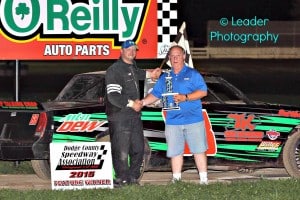 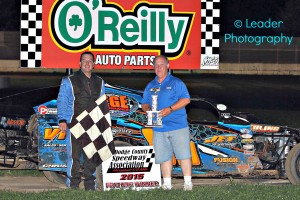 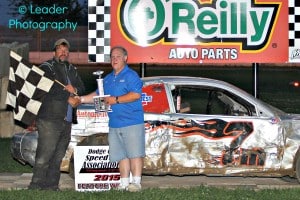